Despite a slow start during the prelims and a devastating end to the main event, the UFC’s return to the O2 Arena in London was a record setting event with tons of memorable moments. 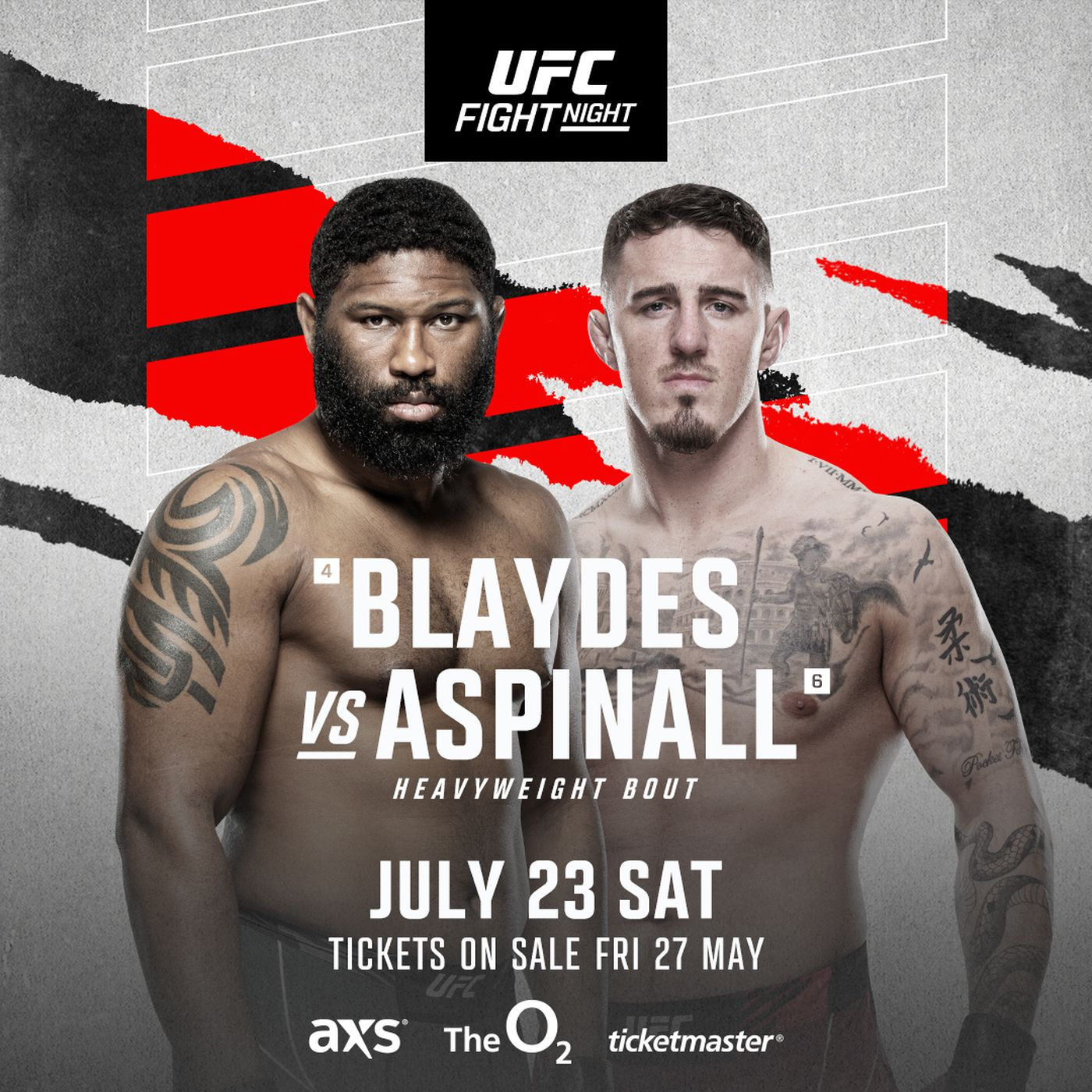 Four months ago, the UFC returned to London for the first time since 2019 with UFC Fight Night: Volkov vs. Aspinall. Dana White and the UFC wanted to treat British fight fans with an absolutely stacked card, providing a lineup that rivaled (or even bested) some PPV events. When the dust was settled, fans were quick to declare that Volkov vs. Aspinall was the greatest Fight Night card in UFC history.

Living up to that expectation was a tall order heading into UFC London: Blaydes vs. Aspinall. Unfortunately, a slow start on the prelims and a disappointing finish to the main event prevented this Fight Night from reaching the high standard set back in March. Nevertheless, UFC Fight Night 208 proved to be a noteworthy card with some magical moments that made up for some of the lackluster moments.

It was the second time Tom Aspinall was headlining an event at the O2 Arena in London in the span of four months. Back in March, he made quick work of longtime heavyweight contender Alexander Volkov, defeating him via straight armbar in the first round. In fact, Aspinall was running through the heavyweight division like a buzzsaw, with many believing he would soon join Michael Bisping as the UFC’s only British champions.

Across from him was his toughest challenge to date in Curtis Blaydes, a supremely talented heavyweight wrestler who has always had championship pedigree. With Blaydes ranked 4th and Aspinall ranked 6th coming into the fight, the winner likely would have gone on to fight for the belt.

Unfortunately, fans didn’t get to see which heavyweight contender deserved to fight for the title more. Fifteen seconds into the first round, Tom Aspinall’s knee gave out on him after throwing a leg kick. Not only was it anticlimactic, it’s devastating for the British fans, whose best hope for a champion may be sidelined for quite some time.

While a despondent Blaydes could only shake his head in frustration, Aspinall was fitted with a leg brace and helped out of the Octagon. He left the arena on a stretcher, leaving the crowd restless, worried, and disappointed.

Hours after the fight, Aspinall posted a picture of him sharing a beer with Curtis Blaydes backstage. At this moment, there have been no updates regarding the extent of the injury.

Although Tom Aspinall was headlining, the people’s main event was Paddy “the Baddy” Pimblett against Jordan “Monkey King” Leavitt in a battle of lightweight prospects. Since debuting with the UFC last year, Pimblett’s popularity has soared astronomically, both with British fans and globally. Many believe Paddy will become the UFC’s next superstar, in similar stature to Conor McGregor. However, in order to keep that train rolling, he needed to beat Leavitt.

There was certainly a lot of personality involved in the buildup, with Leavitt promising to twerk after beating Pimblett. Paddy’s response was an instant quotable classic, saying that he was going to teabag his opponent like it was a game of Modern Warfare 2.

While Leavitt’s wrestling and physicality presented Paddy with some difficulties during the start of the fight, he was able to win the round on all judge’s scorecards after threatening multiple guillotines and finishing in a dominant position. Going into the second, it was clear how each fighter wanted to approach things: Jordan wanted to use his wrestling while Paddy was hunting for a knockout or submission.

The finishing sequence of the fight came when Pimblett was threatening Leavitt with a standing arm triangle. Leavitt dropped low to try and squeeze out, eating a massive knee for his trouble. It was the beginning of the end, as Paddy was able to take his back from there and work the rear naked choke. It was Paddy’s third consecutive finish in three UFC bouts.

The O2 Arena went nuts for their countryman, who even fulfilled his promise by dropping some squats in front of Leavitt after submitting him. However, Paddy’s star shined even brighter during his Octagon interview with Michael Bisping. Pimblett revealed that 5 hours before his weigh-in, a friend of his committed suicide. He dedicated the victory to his friend and made a plea to society to lift the stigma off men seeking help for mental health issues. It was a powerful message that resonated with people across the world.

There’s no doubt about it, Paddy “the Baddy” is the real deal. He’s on the fast track to becoming one of the UFC’s biggest attractions, and should find himself standing across a ranked lightweight opponent sooner rather than later.

Molly “Meatball” McCann is another rising star from Liverpool, whose friendship with Paddy Pimblett is one of the most entertaining buddy stories in MMA (move over, DC and Khabib!). Back in March, she flatlined Luana Carolina with a spinning elbow, sending the O2 crowd into a frenzy.

Expectations were high for her to put on another electric performance, but McCann provided exactly that when she smoked Hannah Goldy with a flurry that included a devastating spinning elbow and punishing punches. Herb Dean put a stop to the action, securing Molly’s second finish in a row and third consecutive victory overall.

Once again, the crowd went wild. Like her fellow scouser Pimblett, McCann is full of personality, winning the hearts of MMA fans around the world. After her victory, she donned a blonde Pimblett wig and began drinking Howler Head whiskey cageside so she could watch her friend Paddy.

The future is bright for “Meatball” as her sizzling performances and hilarious relationship with Pimblett are combining to make her the next big thing in the UFC’s flyweight division.

Unlike the UFC’s last venture to the O2 Arena, finishes were hard to come by in the early going. In fact, of the 8 fights on the preliminary card, there was only one finish. Now, decisions don’t necessarily indicate boring fights. However, there were quite a few bouts with minimal damage that left fans feeling a bit underwhelmed.

UFC Fight Night: Blaydes vs. Aspinall had its shortcomings, but its highs were very high. There hasn’t ever been a buzz around a British fighter like Pimblett and watching his stock continue to rise makes it feel like we’re witnessing the beginning of something truly special.

Of course, the biggest concern right now is for Tom Aspinall. It’s likely that the 29-year-old will have to miss significant time after blowing out his knee. We wish Tom a speedy recovery and hope to see him back in the Octagon sooner rather than later.

Curtis Blaydes has expressed his desire to fight for the title and at this point, he’s earned it. Even though nobody wants to win in the way he did, he’s positioned perfectly in the division to take on the winner of Stipe Miocic vs. Jon Jones (if that fight takes place).

So while this Fight Night card couldn’t quite match the magic of UFC London: Volkov vs. Aspinall, it was still another great event that felt like a turning point for some of the UFC’s biggest stars going forward.

What did you guys make of the card? Let us know in the comments!

Canelo vs. GGG 3 Weigh-in Results: Both Athletes Make Weight, the Fight Is Official